Thanks to Becky at Organizing Made Fun  for her wonderful challenge and toy cleanup posting party.


I love organizing and get ridding of excess, so I decided that there is nothing like a deadline to make me tackle the ultimate challenge.  CLEANING AND ORGANIZING WITH CHILDREN.  It was good, and a bit crazy.  Aaron actually enjoyed most of it.  He did great!  Sarah was a good sport too.  Her toy "go-through" even got her playing with her dolls afterwards...something she rarely does.  John is a bit of packrat/hanger-on-of-all-that-is-mine. You will see what I mean later.

We started by going through the boy's large vehicles, tractors, implements, etc.

We counted up how many items they had and I would say, Ok, pick your favorite 4 tractors and put one in the basket...which implements do you like best... can we share this one?  For some reason, they didn't mind getting rid of some of their big vehicles.

I need to insert here that a friend of mine who is returning to an orphanage in Ethiopia to pick up 2 children soon (So Happy for them!)  told me recently that they were thinking of taking some tubs of books/toys to the orphanage. "Perfect timing," I told her!   So the boys knew that their giving was going to boys without.  It is a joy to see the generosity of Jesus push through in their conversations. John could hardly bear the thought of giving up a tractor. We won't say how many he kept, he is rather sensitive about it. We had a long discussion and then I told him he could think about which of 2 that were his least favorite he would donate.  Later, all by himself he came up crowing about which one he would share.

They consolidated their donations in this basket. 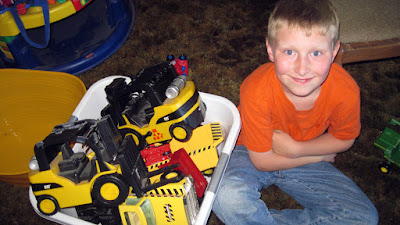 Don't worry, Grandpa...we kept the Farmalls and most of the John Deere's =)

Then we moved into Sarah's room and went through her stuffed animal and doll bins.  May I add here that this spring I got some new organizing bins for her room, but the animals and dolls in and she has rarely if EVER even gotten them out!  So I was a bit curious to see how this would go.  I told her to keep 5 stuffed animals and 5 dolls.  Mostly b/c she has dolls from all her grandma's and some of them are a bit too good to get rid of =)  Hmmm Mudder.  Didn't bother her a bit.  I love the fact that 2 of the tubs are now available for other use.  We'll tackle her and Stephen's closet when the season changes. (That's an all morning activity!)

Here is the animal pile 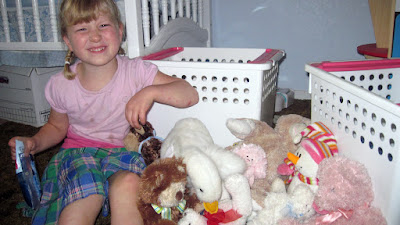 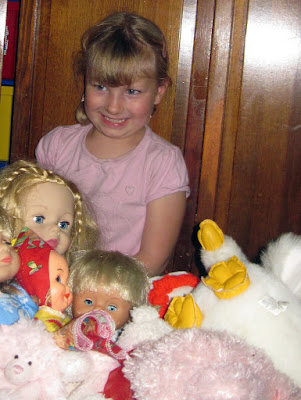 Here is her stash to donate.  Sorry for the bad photo, my camera gets goofy when the batteries get low.


Well since we are a family of 6, this is all we got done that day.

The next day we went DOWN to the basement where we have a "family room" that houses a bookshelf, and toy bin.  It is often rather a mess, mostly because I don't have to go down there very much, so I don't.  And as you know, out of sight - out of mind. When I don't see it, I don't have them clean it up.  But part of the reason it is hard to keep clean is b/c there are too many toys.  I've done many purges with them out of sight, but I followed Becky's advice and involved them in all of it.  First we went through the books, then we went through the toy bins, and then we went organized the rest of the room =)  Happy Momma! And yes, I definitely need to be more organized and have a certain time when they clean up the room to my specs.  So to prepare for that chain of events, I took lots of pictures of the perfectly clean and organized room.  I'm going to print them and hang them down there.  Then inspection should be simple.  If it doesn't look like the picture, it's not done.  This is the theory.  We shall see how the implementation succeeds. 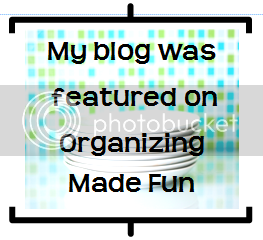